It is said that, after seven centuries of raiding, the Danes under Swein the Fork Beard took control of most of England and Ireland in 1013 - 1014.  His son, Canute, (944 - 1035) was to become King of England. Swein ordered celebrations to be held in Limerick, Western Ireland (now Eire) and instructions were given for one thousand beautiful daughters of the Irish nobility to be present.  In their stead the same number of Irish youths were dispatched, disguised in women’s habits with long Irish skeans (daggers) below their cloaks.  A massacre of the Danes followed.  One of these youths was Anselan Buey OKyan or Ocahan (pronounced Okane), son of the King of Ulster, the Fourth part of Ireland (roughly modern Northern Ireland).  In 1016, as a result of this exploit, he fled Ireland and emigrated to Argyll in Western Scotland.

Eventually he acquired lands in the Lennox (to the North of the present day city of Glasgow), either by marriage, or as a reward for services rendered to King Malcolm II of Scotland, 1005 - 1034.  Lennox was broadly Strathendrick, but at one time it was known to extend from Glenfuin in the West to Fintry in the East.  In addition, Anselan was granted Arms, practically identical to those used by the Buchanan Society today.  All records of Irish insignia have long since disappeared.

The Name BUCHANAN is possibly derived from three sources: from the Gaelic Boghchanon, meaning “low ground belonging to the Canon”, Mac-a-Chanonaich, meaning “Son of the Canon”, whilst the place name BUCHANAN, Bothchanian, means “The Canon’s seat”.  A simpler derivation is the development of Buey OKyan into BUCHANAN.  However, all point to some connection to the Canon.  On Inchcailleach, an island in Loch Lomond opposite the village of Balmaha, (the Pass to the Highlands) and near the mouth of the River Endrick, a church had been founded between 650 and 700 AD by St Kentigerna, wife of an Irish Prince Feradach.

It is more than possible that the lands accepted by Anselan had belonged originally to the Canon of this church, of which the remains are still to be seen.  In 1621 the Parish Church of Buchanan absorbed the Parish of Inchcailleach.  The United Parish extended from the River Endrick in the South to Inversnaid in the North and the entire area covered today by the Queen Elizabeth National Forest Park.  This includes the mountain of Ben Lomond.  In 1314 the Clan supported King Robert the Bruce at Bannockburn in Scotland's War of Independence against England. 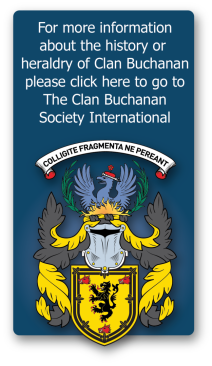